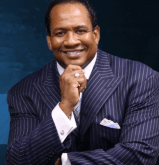 Dr. Patrick Wooden, a black pastor who helped lead the successful effort to pass the North Carolina Marriage Protection Amendment, recorded a radio ad in which he denounces President Obama for “turning his back” on the African American community.

Wooden asks black North Carolinians to oppose Obama this fall. “With the strong support of the African American community, the amendment protecting marriage as the union of one man and one woman passed overwhelmingly,” Wooden says in the radio ad.  “The very next day, President Obama came out for homosexual marriage. Now his campaign leaders are working to deny North Carolina’s ability to define marriage, and they want to overturn our state marriage amendment altogether. Join me in saying ‘no more’ to President Obama.”

The National Organization for Marriage (NOM), which paid for the radio ad, said it will spend $34,000 playing the ad in the Raleigh area, because that city is home to 40 percent of the state’s black voters.

“The goal of our advertising campaign is to issue a wake-up call to the African American community in North Carolina that President Obama does not represent the values that they have fought to protect,” said NOM president Brian Brown in a statement. “We urge all North Carolinians to join Dr. Wooden in rejecting the anti-family policies of President Obama this November.”