Posted on February 4, 2013 by tfdfblog
By Crystal Wright

Crystal Wright is an occasional contributor to The Root DC and is the editor of the political site “Conservative Black Chick.”. 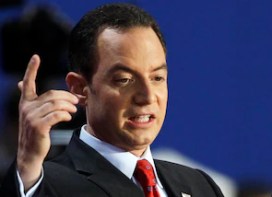 Is the Republican National Committee just “stupid” as Gov. Bobby Jindhal (R-LA) implied last week, or just hell bent on business as usual, ignoring the minority vote til’ the next century? Either way, the same people who insisted Mitt Romney be anointed the GOP 2012 presidential nominee are the same people now in charge of the party’s image makeover and recruiting voters of “color” to the party: Yes, middle aged and old white men. And all signs point to the fact that we’re heading for the same underperforming results unless we change directions fast.

Nearly three months after the election, what we see coming from the RNC is lip service to minority outreach. A Republican source who is familiar with the committee’s inner workings told me there are still no blacks working at the RNC other than in administrative positions and only one Hispanic person working the RNC political department.

Maybe that’s why the outreach plan includes the Martin Luther King Jr. video, the RNC released Jan. 21, King’s holiday and Inauguration day, in which Priebus looked uncomfortable talking about King’s legacy. In the three minute video, Priebus is surrounded by four people, two of which are minorities, who never speak but look like hostages held against their will. Does the RNC like its minorities silent with no voice or influence?

Adding insult to pandering insult, during the RNC’s winter meeting held in Charlotte in January, it approved a resolution to commemorate the achievements of black Republican Frederick Douglass. This is the RNC’s idea of outreach to black voters: a resolution and a video!

Priebus says he wants to spend time doing “extensive research” on why the GOP lost in 2012 and learn ways they can grow the GOP tent beyond white voters. In the press release  announcing the initiative, the RNC proclaimed “The Growth and Opportunity Project is co-chaired by five prominent Republican leaders.” But there lies the problem.

What’s striking about this makeover gang of five is there are only two people of color. How can we seriously have increase our standing with minorities if the committee designed for outreach isn’t majority minority?

It’s doesn’t require a brain surgeon to figure out what the Republican Party needs to do to win. Nor does the RNC need to spend months navel gazing, hosting conference calls and meetings to the hear from the same people they’ve been hearing from.

What the RNC needs to do is to start building meaningful relationships with Asians, blacks and Hispanics, take the conservative message outside of its comfort zone of the suburbs into the cities, particularly inner cities. It’s really not hard to do, if you are serious about “growing” and winning.

Priebus needs to give a mandate to all state chairmen and committe members to tell their local parties to make it a priority to recruit more minority members to the over 3,000 local Republican chapters. Now is time for the GOP to literally take its message to the street. The party will only get more diverse through grassroots outreach.

Meanwhile, while the RNC is contemplating the next phase of its life, perhaps it should reexamine its rules for membership to the RNC. Currently, each state or territory has a state chairman and a committeeman and committeewoman. As David A. Bositis wrote in “Blacks & the 2012 Republican National Convention, “at least one third of the members of the RNC are women by quota.” But there are no quotas for minorities. I think the RNC should either have quotas for all or quotas for none.

The RNC also needs to do a much better job identifying and supporting minority and women candidates.  Not just monetary support but strategic support to help them win.

Ultimately, the GOP won’t begin to shed it’s “white only image” if it continues to use mostly white spokespeople talking about conservative values.  Chanel recently hired Brad Pitt to be appear in its Chanel No. 5 perfume ads because Brad makes anything sexy and Chanel wants more women to buy it’s perfume. If the RNC wants more minorities to buy its message,  it should use spokespeople who look more like Sarasota Springs, Utah Mayor Mia Love, Senator Kelly Ayotte, Senators Tim Scott, Marco Rubio, and Ted Cruz and less like Ari Fleisher and Henry Barbour. It’s time for RNC make conservatism sexy because “stupid” has got to go.