CHARLOTTE — Republicans were busy in North Carolina and Washington on Monday. Did the activity in the courts and on a conservative stage have the effect of muddying the welcome mat the GOP rolled out for minority voters in the state?

“Our platform has a lot in common with the African American community, which is strong families, believing in God, a strong economy and equal opportunity for all,” said Philip, one of three full-time staffers in the office. He acknowledged his tough job in a state whose black voters strongly supported Democratic candidates and helped lead President Obama to a narrow victory in North Carolina in 2008. But he was encouraged by his reception so far. At a recent community appearance, he said he was greeted by “long lines” of the curious who wanted to learn more about the Republican Party. One of those who came Monday to hear details about the party was Carlos Rogers, a 30-year-old business owner and Republican who was drawn, he said, by the party’s low-tax, pro-entrepreneurial message. 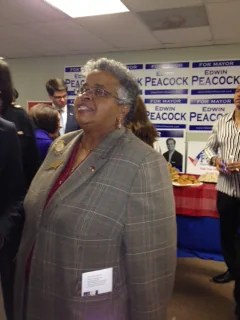 When asked about the voting laws, Philip said he preferred to stay out of policy discussions and concentrate on outreach. However, Ada Fisher did not hesitate.  The North Carolina Republican national committeewoman said the controversial legislation was not a “voter suppression” bill. “The people who say that haven’t read the bill.” The Constitution says citizens have the right to vote and the bill ensures that, said Fisher, a retired physician.

The Rev. William Barber, head of the state NAACP, one of the civil rights organizations suing the state, had a different view. In a conference call, he said the law is not just about photo ID. “It is a bill that attempts to implement a strict voter ID requirement,” he said, “cut early voting by a full week, eliminate same-day registration, allow voters to be challenged by any registered voter in the same county rather than precinct, ban 16- and 17-year-olds from pre-registering to vote and repeal the state directive that high schools conduct voter registration drives, prohibits paid voter registration drives, prevents counties from extending poll hours to accommodate long lines — this is a monster voter suppression bill.”

Penda Hair, co-director of the Advancement Project, a national rights group supporting the state NAACP’s action, said on the call that the law was “written with almost surgical precision to go after voters of color,” and how they have gotten used to voting, whether it’s Sunday voting, early voting, straight-ticket voting or the use of provisional ballots. “When you add them up together,” she said, “what you have is the worst voter suppression law in the country.”

Barber mentioned Republican Colin Powell’s criticism of the bill as hostile to minority voters when the retired general spoke before a North Carolina business group. “The system is not broken, they are breaking the system,” Barber said. “They are trying to go backwards when the state has already moved forward.”

In Charlotte on Monday night, the RNC’s outreach continued with a speech from North Carolina GOP Chairman Claude Pope, who said in an Obama echo that the party was “fired up  and ready to win” minority voters. The Democrats “love to slice and dice America,” he said. “We are all Americans – we believe in freedom, we believe in the Constitution.” The Democrats “remove the freedom to fail,” Pope said. “They love to steal our dreams.”

“Haven’t we heard this story before?” asked Kiara Pesante, DNC Southern regional press secretary and director of African American media in a Monday statement reacting to the opening of the Charlotte office. “From their ‘50 State Strategy’ to their ‘autopsy report’ after their disastrous 2012 presidential campaign, the Republicans have promised time and time again to listen to the needs of key constituencies and change their ways. But  after their cynical, divisive crusade to make it harder for African Americans to vote in states like North Carolina, to prevent the 7.1 million uninsured black Americans from accessing affordable health care, and even shutting down the government for 16 days — furloughing up to 150,000 African American workers and harming critical programs like SNAP, WIC and Head Start — the GOP has yet again proven that are so far out of touch they can’t even see it.”

On Monday, North Carolina Gov. Pat McCrory (R) was out of the state but not the conversation. In Washington, McCrory celebrated the wave of conservative legislation he has supported and signed since taking office this year. He was the hero in a speech to the conservative think tank The Heritage Foundation  titled “A Conversation with a Reformer: How the States Are Leading the Way.”

McCrory used the occasion to again tout the state’s voting laws as common sense, and to criticize legal challenges against it. He also took issue with state Attorney General Roy Cooper – a Democrat and potential 2016 rival – for his public disapproval of a voting bill he has the duty to legally defend.

McCrory has been the subject of criticism and protests in his home state for a long list that ranges from passing on federal Medicaid funds to spending $230,000 to remodel bathrooms in the executive mansion (he reversed course on that last one). So it must have felt good to be among friends.

But as a member of a political party throwing a big North Carolina party with a theme of inclusion, the governor’s timing could have been better.