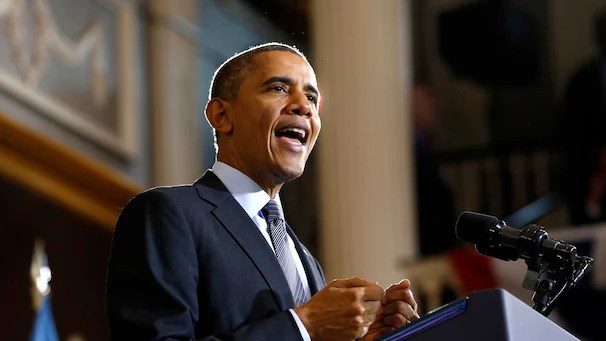 It is a catchy sound bite that has turned around to bite the hand that fed it to the country: If you like the health insurance you have, you can keep it.

President Obama’s credibility has taken a hit over that line, which he tossed off in various versions during countless campaign stops and policy speeches.

The damage comes not just from the fact that it does not happen to be true, which hundreds of thousands who had bought coverage on the individual market are learning as they receive notices of cancellation from their insurers.

The deeper problem with that promise is that it attempted to gloss over the fact that choices and trade-offs were part of the effort to reform the nation’s sprawling, troubled health-care system.

Many of those decisions go to philosophical and ideological questions that divide how Democrats and Republicans, liberals and conservatives, look at the world.

Should people continue to have the choice to buy insurance that, for many, will turn out to be inadequate?

Or should they be forced to purchase only what the government deems satisfactory?

The Affordable Care Act settles those questions on the side of government having more say about what options Americans will have when they buy insurance.

But instead of making the case for that change — and what it would cost — Obama insisted that people who are satisfied with what they have would see no difference.

Health care is not the only area in which the Obama administration has clung to a we-can-have-it-all message. It also, for instance, has played down the impact of curbs on carbon dioxide and other air pollutants from coal-fired power plants.

Rather than straightforwardly acknowledging that the regulations will help drive coal plants out of business — and arguing that the damage to the industry will be outweighed by environmental and public health benefits — administration officials have insisted that these are achievable standards that will maintain the nation’s diverse energy mix.

Obama’s reassuring sales pitch on health care represented an effort to avoid the political pitfalls that others encountered when trying to overhaul the system in the past.

In 1994, for instance, the Clinton administration’s effort to insure the 15 percent of the population lacking coverage foundered because of the fear that the proposal generated in the 85 percent who had insurance.

Obama “was sort of overlearning the lessons of Hillary Clinton’s time on health care. What destroyed Hillary Clinton’s plan was that people became convinced they were going to lose their health care,” said Elaine Kamarck, who was a White House aide at the time and now heads the Brookings Institution’s Center for Effective Public Management.

“The one lesson that was learned about messaging was that you had to guarantee people that nothing will change,” she said.

In fact, the individual market — where about 15 million people who do not get coverage from their employers currently buy it — was overdue for change. It has long been notorious for selling skimpy policies that do not come through when consumers need them most.

“This market has always been the Wild West,” Health and Human Services Secretary Kathleen Sebelius said Wednesday in congressional testimony, during which Republicans repeatedly brought up the canceled policies.

What makes that individual market even more treacherous is that many consumers, who often have few resources and little information when they buy coverage, have opted for bargain-basement policies. In many cases, they were blind to the danger they put themselves in until it was too late.

In 2005, a Harvard Law School professor named Elizabeth Warren produced groundbreaking research on the subject of inadequate coverage. In studying 1,700 bankruptcies nationwide, Warren — who is now a Democratic senator from Massachusetts — found that medical problems were behind half of them and that three-quarters of those people actually had health insurance at the time.

“How did illness bankrupt middle-class Americans with health insurance? For some, high co-payments, deductibles, exclusions from coverage and other loopholes left them holding the bag for thousands of dollars in out-of-pocket costs when serious illness struck,” she wrote in The Washington Post.

The individual insurance market is also where some of the industry’s shadier practices have taken place.

“There are a number of Americans, fewer than 5 percent of Americans, who’ve got cut-rate plans that don’t offer real financial protection in the event of a serious illness or an accident,” Obama said in a speech Wednesday in Boston. “Remember, before the Affordable Care Act, these bad-apple insurers had free rein every single year to limit the care that you received or used minor preexisting conditions to jack up your premiums or bill you into bankruptcy.”

“So a lot of people thought they were buying coverage, and it turned out not to be so good,” Obama said.

Democrats are not the only ones who have been alarmed about what has happened to vulnerable people on the individual market.

Rep. Joe Barton (R-Tex.), for instance, once had to intervene with Blue Cross on behalf of a constituent whose insurance policy was canceled after she received a diagnosis of invasive and aggressive breast cancer. The company’s reason: A doctor treating her for acne had mistakenly written into her record that she might have a precancerous skin condition, which gave the company grounds to say she was hiding a serious medical problem.

“It was bad enough that she had to deal with the trauma of breast cancer,” Barton said at a 2009 hearing of the House Energy and Commerce Committee’s subcommittee on oversight and investigations. “But to be denied coverage right before potentially lifesaving surgery, quite frankly, is something that no human being should have to undergo.”

Juliet Eilperin contributed to this report