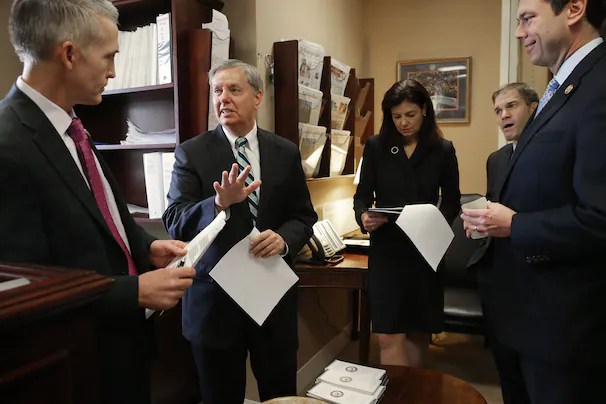 Chip Somodevilla/Getty Images – Rep. Trey Gowdy (R-S.C.), Sen. Lindsey Graham (R-S.C.), Sen. Kelly Ayotte (R-N.H.), Rep. Jim Jordan (R-Ohio) and Rep. Jason Chaffetz (R-Utah) prepare for a news conference at the U.S. Capitol on Wednesday. Graham said he would put a hold on all Obama administration nominations pending in the Senate until Congress is given access to survivors of the September 11, 2012, attack on the U.S. Consulate in Benghazi, Libya, that killed Ambassador Chris Stevens and three other Americans.

By Paul Kane and Ed O’Keefe

Senate Republicans blocked President Obama’s nominees to oversee the home mortgage industry and to serve on a powerful appellate court, refusing to stop a filibuster of the two selections amid fresh rumbling from Democrats about changing the chamber’s rules.

On a 56 to 42 vote, the Senate fell four votes shy of the 60 required to choke off debate in the GOP filibuster against the nomination of Rep. Mel Watt (D-N.C.) to run the Federal Housing Finance Agency, which oversees mortgage giants Fannie Mae and Freddie Mac.

Immediately after that vote, Obama’s bid to place Patricia Millett on the U.S. Court of Appeals for the District of Columbia Circuit fell five votes shy of 60, leaving the prominent Supreme Court lawyer caught in a filibuster that has nothing to do with her qualifications for the post.

Just two Republicans supported Watt’s and Millett’s nominations. After the vote, Vice President Biden and Senate Majority Leader Harry M. Reid (D-Nev.) raised the prospect of having another fight over changing rules to eliminate filibusters, at least on nominations.

Reid technically voted with Republicans in supporting the filibuster, but that was done merely to reserve a procedural right so that he could quickly call up the nominations for votes again without parliamentary hurdles. Several hours after the vote, Reid issued a statement with a thinly veiled warning suggesting that he would bring up the nominations again in the “very near future,” suggesting a new rules fight was in the offing.

“Something has to change, and I hope we can make the changes necessary through cooperation,” he said in his statement.

Republicans acknowledged that they would confirm someone with Millett’s experience to just about any other federal court — she is viewed as an accomplished appellate court lawyer and has argued 32 cases before the Supreme Court — but not the important D.C. federal court.

“The court is currently comprised of four active judges appointed by Republican presidents and four active judges appointed by Democrat presidents. There is no reason to upset the current makeup of the court, particularly when the reason for doing so appears to be ideologically driven,” Sen. Charles E. Grassley (Iowa), the top Republican on the Judiciary Committee, said during floor debate.

There are three vacancies, including the seat that Millett has been nominated to fill, but Republicans say that the court’s caseload is not heavy enough to warrant appointments ahead of other appeals court circuits. However, the tilt of the court leans more conservative when six senior judges — five of whom were appointed by Republicans — are included in that court’s mix. Those judges continue to hear some cases.

Grassley has proposed legislation that would reduce the size of the D.C.-based appeals court, and some Republicans said they would be willing to consider supporting Millett’s nomination after a broader negotiation over the size of each federal appellate court.

A number of Republicans said in recent days that Watt — a senior member of the House Financial Services Committee — does not have the experience to oversee an institution as large as the Federal Housing Finance Agency.

White House press secretary Jay Carney said it is “enormously disappointing that Republicans would filibuster” Watt’s nomination. “We know he’s qualified, and we know he would do a good job. And there’s a heck of a lot of important work that needs to be done in that agency, and Mel Watt needs to be in that job so that this work can move forward,” Carney told reporters.

Asked whether Obama would drop Watt’s nomination and find a new candidate for the position, Carney said, “Absolutely not.”

Carney also called Millett “extraordinarily qualified” and said the arguments that some Republican senators have made about caseloads are “astoundingly hypocritical.”

In a floor speech before the vote, Sen. John McCain (R-Ariz.) said that Watt’s lack of experience in the industry represented the sort of “extraordinary circumstance” that he was thinking of in 2005 when he first helped defuse a showdown over presidential nominations. Then, Republicans — with a similar 55-seat majority caucus — tried to curtail filibuster rules, and Democrats were defending the parliamentary maneuver that has been increasingly used by the minority party in the past two decades.

In July, McCain helped negotiate a deal with Reid and Sen. Charles E. Schumer (D-N.Y.) to avoid changing filibuster rules on a party-line vote, something that has never been done in Senate history. Normally, any change to a Senate rule would have to first clear a 67-vote hurdle.

Leaving the Capitol shortly after the Watt and Millett filibusters, Biden told reporters the issue would probably come up again in the weeks and months ahead.

As senators in 2005, Obama and Biden publicly defended the filibuster and the requirement of a supermajority to change Senate rules.

McCain denounced any effort to change the rules unless there is a broad supermajority supporting the move. “We will destroy the very fabric of the United States Senate and that is that it requires a larger than numerical majority in order to govern,” he said.

Philip Rucker contributed to this report.