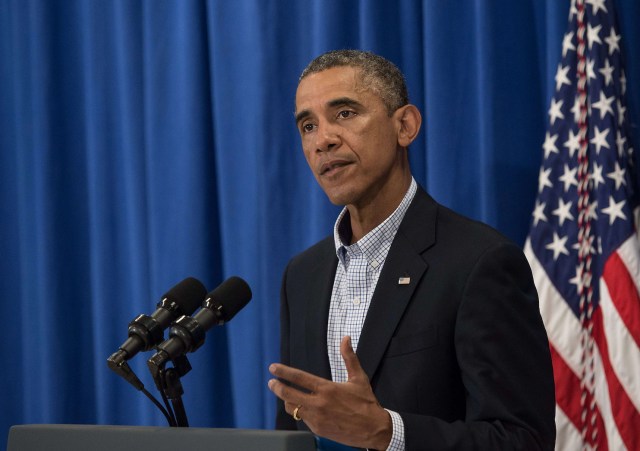 President Barack Obama speaks on the situation in Iraq and in Ferguson, Missouri, at Martha’s Vineyard, Massachusetts, on August 14, 2014. (Nicholas Kamm/AFP/Getty Images)
By Chris Cillizza
The speech that made Barack Obama famous cast him as a post-racial figure offering a vision of America no longer divided along black-and-white lines.

“I stand here today grateful for the diversity of my heritage, aware that my parents’ dreams live on in my two precious daughters,” Obama, then an Illinois state senator, said in his keynote address at the 2004 Democratic National Convention. “I stand here knowing that my story is part of the larger American story, that I owe a debt to all of those who came before me and that in no other country on Earth is my story even possible.”

And yet, from Obama’s introduction to the national stage that night in Boston to today, as the country’s eyes turn toward the ongoing racial unrest in Ferguson, Mo., the president’s relationship with the issue of race has been far more complicated — and fraught — than he could have imagined on that night a decade ago. Obama was careful, particularly during his 2008 campaign, not to cast himself as a black man running for president but rather as a man running for president who just happened to be black. (He never used the words “black” or “African American” during his acceptance speech at the 2008 Democratic convention.)

For Obama, the reality of just how hard it would be to be a post-racial politician hit home in the form of the Rev. Jeremiah Wright. Wright, a pastor at the church that the Obamas attended in Chicago, became a major issue in early 2008 when some of his controversial remarks came to light. At first, Obama sought to play down both Wright’s comments and his relationship with the preacher. But as the brush fire grew into a five-alarm blaze, Obama responded with what, to my mind, is the single best speech he has ever given.