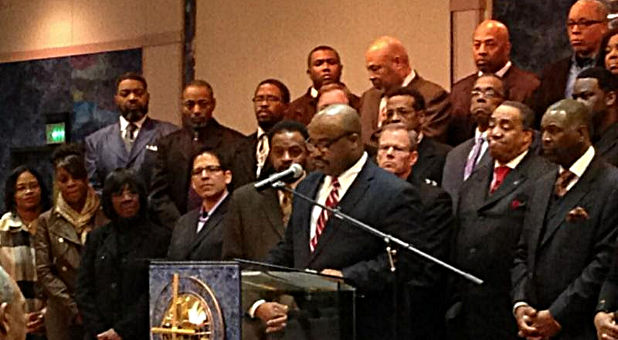 On March 21, Judge Bernard Friedman of the United States District Court for the Eastern District of Michigan overturned and ruled unconstitutional the 2004 voter-approved amendment to the Michigan Constitution that defines marriage as between one man and one woman.

Judge Friedman concluded that upholding the voting rights of 2.7 million voters who voted in favor of marriage protection is not “rational.”

One hundred Detroit black pastors maintain that this decision was made under the false guise that the majority of the people of Michigan are discriminating against the civil rights of lesbians and homosexuals due to their sexual orientation or preference.

Michigan Attorney General Bill Schuette has appealed Friedman’s ruling to the United States Court of Appeals for the 6th Circuit, also successfully asking the 6th Circuit for a stay, which keeps the voter-approved Marriage Protection Amendment temporarily in place, pending the ruling of the appeals court.

The black Detroit pastors are outraged over Friedman’s ruling and have positioned themselves to voice their opposition in the U.S. Court of Appeals.

The pastors, in particular, are offended by the comparison of marriage redefinition to black civil rights struggles.

“To state that marriage redefinition is in any way similar to the civil rights movement is intellectually empty, dishonest and manufactured,” says minister Stacy Swimp, founder of Revive Alive Missional Ministry. “When has anyone from the LGBT demographic ever been publicly lynched, specifically excluded from moving into neighborhoods, prohibited from sitting on a jury and denied the right to sue others because of their sexual preferences?”

Pastor James Crowder, of St. Galilee Baptist Church and president of the Westside Minister’s Alliance, also weighed in on the narrative of sexual orientation being a civil right.

“Judge Friedman is sanctioning the staging of a false story,” Crowder says. “On stage are many actors who pretend that redefining traditional marriage is as valid as blacks fighting against the carnage of chattel slavery and the humiliation of Jim Crow. Never have I been so insulted. The curtain must be pulled down on this play of disinformation.”

There have been several ordained clergy in various denominations who have come to the side of lesbians and homosexuals, alleging that the Bible doesn’t teach against homosexual and lesbian lifestyles and that God is love and cannot condemn any kind of love.

“We will not follow men who would rather believe a lie than the truth. We cannot and we will not endorse anyone who blatantly blasphemies the Word of God and leads people in the wrong direction”, states the Rev. Dr. Randolph Thomas, senior pastor of Greater Bethlehem Church and president of the Westside Minister’s Alliance.

The group of black Detroit pastors and Christian leaders are calling on Christians from all the States under the jurisdiction of the 6th Circuit Court of Appeals to stand with them in taking advantage of the court’s rule, which allows them to file an amicus brief.

“Anyone from Michigan, Ohio, Kentucky or Tennessee who wants to make sure your voice is represented, we are asking you to take to take this opportunity to stand up for your right of religious freedom and for God’s truth,” says Apostle Lennell Caldwell, pastor of First Baptist World Changers International Church in Detroit.

Apostle Caldwell advises that pastors and Christian leaders who want to stand with them should contact Catherine McMillan at cmcmillan@thomasmore.org This email address is being protected from spambots. You need JavaScript enabled to view it.  with their full name, the name of their church or Christian organization, the address of the organization and its phone number.

Concerned pastors and leaders are encouraged to attend a press conference Wednesday at 10 a.m. EST at First Baptist World Changers International in Detroit.