Posted on September 11, 2014 by tfdfblog
By Hunter Schwarz September 10
A Georgia state senator posted on Facebook on Tuesday about being upset by efforts to increase voter turnout in a part of one county outside Atlanta with a large number of black residents by an appointee of the Gov. Nathan Deal (R).

Sen. Fran Millar (R) posted complaints about Lee May,  interim chief executive of Dekalb County, Ga., who was appointed by Deal in July 2013, including that May decided to hold early voting on a Sunday at a mall in an area with a high concentration of black residents and  “African-American mega churches,” citing this Sunday article in the Atlanta Journal-Constitution. The sections of his post are highlighted below: 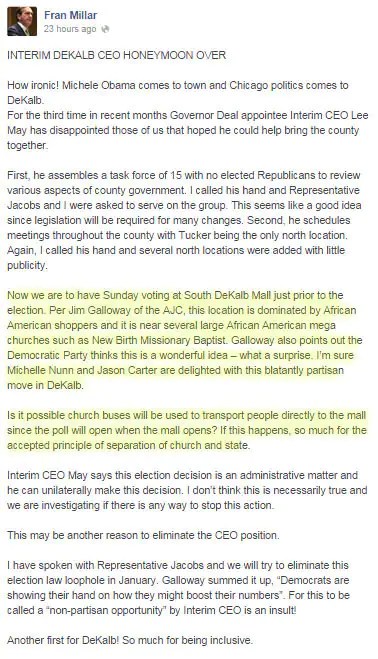 Millar also says May attempted to create a task force that initially didn’t include any Republicans to review the county government.

Later in the comments of his post that he would “prefer more educated voters than a greater increase in the number of voters.”

When asked on Facebook what he meant by educated, Millar wrote he meant “informed on the issues.”

“Because I said “educated” on Facebook, people are saying I’m racist,” Millar told the Washington Post. “This is politics. It’s not about race,” pointing to the Atlanta Journal-Constitution article that notes the Sunday voting in DeKalb, a first for Georgia, is in a county the article called “the state’s richest source of Democratic voters.”

Dekalb County is one of five counties Georgia Secretary of State Brian Kemp (R) says his office has received complaints of voter fraud from. Kemp said Tuesday his office is investigating the allegations against two groups headed by Rep. Stacey Abrams (D).