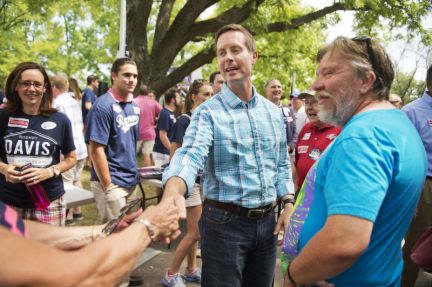 Only three times since the Civil War, as any political junkie knows, has the president’s party gained House seats in midterm elections — in 1934, 1998 and 2002. It now seems quite clear 2014 won’t be another exception to that rule.

But a year and a half ago, that wasn’t a sure thing. In fact, while everyone understood the House playing field would be narrow once again in 2014, questions about the GOP’s political dexterity raised the possibility of small net Democratic gains this cycle.

President Barack Obama was re-elected in 2012, with Democrats gaining eight seats in the House and two in the Senate. Younger voters turned out in big numbers, and Democratic targeting and turnout efforts got plenty of credit, raising the question of whether the party could repeat that success during the second Obama midterms.

In a February 2013 NBC News/Wall Street Journal poll, the president’s job approval stood at 50 percent. The GOP’s positive rating was 29 percent and its negative was 46 percent. Democrats’ positive image was 41 percent, their negative image was 36 percent. The survey found 46 percent of respondents identified themselves as Democrats, while only 34 percent identified with the GOP.

On most issues, including dealing with taxes and the economy, Obama’s party had the advantage.

The environment looked great for Democrats, who also expected that a year and a half of GOP internecine warfare would produce more weak nominees in the next elections.

In June 2013, my newsletter dismissed the idea Democrats could re-take the House but put the most likely outcome of the fight for that chamber as anywhere “from modest Republican gains to modest Democratic gains.”

Four months later, the partial government shutdown played right into the Democrats’ hands. The GOP was widely blamed for the shutdown, which never really put control of the House in doubt but certainly gave Democrats an important talking point in their effort to make gains in the House — and even the chance of netting five to 10 House seats in the next election.

The botched launch of Obamacare turned the political environment on its head. The shutdown quickly became ancient history, and Obama’s poll numbers plummeted.

Since then, the national mood and the midterm dynamics have combined to put Democrats on the defensive.

Colorado challenger Andrew Romanoff has a chance to oust Republican Rep. Mike Coffman, but the incumbent still leads and it’s not clear that Romanoff, a prized Democratic recruit, can win this year.

Martha Robertson, an allegedly strong Democratic challenger against underperforming Republican Rep. Tom Reed, seems to have flopped in what should be a competitive, polarized district in upstate New York.

Republican Reps. Dave Joyce of Ohio, Dan Benishek of Michigan and David Valadao of California started among the 10 most vulnerable Republicans in the country, but now look to be headed to re-election.

Some incumbent Democrats in difficult districts seem to be swimming against the GOP current. Democratic Rep. Patrick Murphy of Florida is the best example, but California Rep. Raul Ruiz also is showing strength now.

But overall, at this point Republican nominees are looking better in individual House races than expected, and Democratic candidates are not doing as well as party insiders once hoped. This isn’t a coincidence, and there is no reason to believe that it will change before Election Day.

With five weeks to go, Democrats now are likely to swipe between two and six GOP House seats, while Republicans are likely to capture between six and a dozen seats from Democrats. If the breeze at the backs of Republican candidates is strong enough (sweeping in GOP nominees who would not win in a “neutral” environment), then net Republican House gains in the double digits certainly are possible.