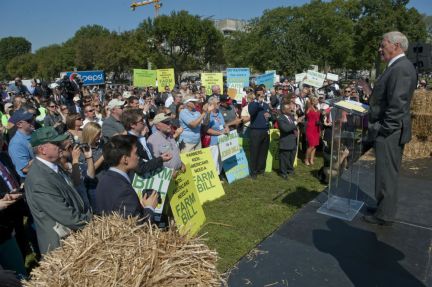 While Democratic and Republican operatives have their own analysis on each race, they often agree on how close a race is and which candidate has the edge.

Sometimes, however, they have wildly different views on where races stand.

In California’s 52nd and Florida’s 2nd, for example, both parties agree the race is close and they have resigned themselves to slogging it out until the end with expensive television ad campaigns. In West Virginia’s 3rd District, the parties disagreed for months which candidate is better-positioned to win — and now they agree Rep. Nick J. Rahall II’s re-election will be a close contest.

But when the parties disagree, their views can be fundamentally different. In at least six contests this cycle, party operatives disagree on where the races stand and where they are headed.

Here is a look at a half-dozen seats where strategists aren’t on the same page — and sometimes seem to be reading out of totally different books.

Minnesota’s 7th District. National Republicans targeted Rep. Collin C. Peterson of the Democratic Farmer Labor Party for defeat from the beginning of the cycle since he represents an expansive rural district that supports Republicans in presidential elections. Members of the GOP continue to believe there is a path for state Rep. Torrey Westrom to win. But Democrats are quite confident Peterson has withstood the GOP attacks and  he starts the final sprint in very good shape. The Rothenberg Political Report/Roll Call rates the race as Leans Democratic.

Arkansas 2nd District. Democrats are very bullish on former North Little Rock mayor Patrick Henry Hays’ effort to take over this Republican open seat. Even though Democrats might lose the governorship and a U.S. Senate seat, the party’s House strategists believe Hays has localized his race with Republican French Hill and the Democrat may even be winning. Republicans have a different view. The Rothenberg Political Report/Roll Call rates the race as Leans Republican.

Maine’s 2nd District. Party strategists on both sides believe their nominee starts the final month of the campaign in the driver’s seat for this open seat, currently held by a Democrat. Both sides can’t be right. But we probably won’t know which side had the better analysis until either Democrat Emily Cain or Republican Bruce Poliquin wins on Nov. 4. The Rothenberg Political Report/Roll Call rates the race as Leans Democratic.

New York’s 1st District. GOP strategists believe Lee Zeldin is in terrific position to recapture this seat  Democratic Rep. Tim Bishop has held, rather tenuously, for nearly a dozen years. But Democrats are increasingly confident that the congressman and the voters have moved beyond ethical questions and Bishop is in good shape for another term. The Rothenberg Political Report/Roll Call rates the race as Tossup/Tilts Democratic.

Iowa’s 2nd District. Republicans aren’t targeting the seat yet because they simply don’t have the money to do it. But GOP strategists believe Mariannette Miller-Meeks has an excellent chance to upset Democratic Rep. Dave Loebsack in what would be a major surprise. Democratic strategists are very skeptical, particularly in a district that President Barack Obama won in 2008 and 2012. The Rothenberg Political Report/Roll Call rates the race as Currently Safe for Democrats for now.

Hawaii’s 1st District. Republican Charles Djou was elected to Congress under some quirky circumstances but lost re-election in a regular general election several months later. He is in a one-on-one matchup with Democrat Mark Takai, but some Republicans see a legitimate path to victory for Djou once again. That’s backed up by a mid-September poll for Honolulu Civil Beat which showed the Republican leading Takai, 46 percent to 42 percent. Democrats aren’t particularly worried. The Rothenberg Political Report/Roll Call rates the race as Democrat Favored for now.