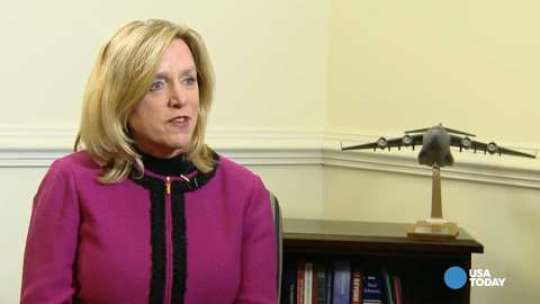 Secretary of the Air Force Deborah James describes progress in the air war against the terrorist group known as Islamic State and explains the U.S.-led coalition has gotten help from an unlikely source: Iran. 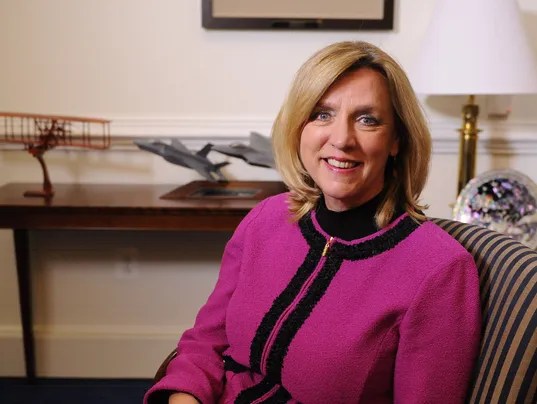 ARLINGTON, Va. — Now that the U.S. military has opened more jobs to women and allowed gay men and lesbians to serve openly, Air Force Secretary Deborah Lee James says the ban on transgender troops is likely to be reassessed and should be lifted.

“Times change,” she told Capital Download, saying the policy “is likely to come under review in the next year or so.” Asked whether dropping the ban would affect military readiness, she replied: “From my point of view, anyone who is capable of accomplishing the job should be able to serve.”

In a wide-ranging interview at the Pentagon, James also described progress in the bombing campaign against the radical group Islamic State, also known as ISIL or ISIS, and said the U.S.-led military coalition has gotten help from an unlikely source: Iran.

The Pentagon last week confirmed Tehran has conducted airstrikes against ISIS targets in eastern Iraq, creating a de facto alliance with the United States despite the lack of formal relations between the two longtime adversaries.

“There has been no coordination between the U.S. and coalition effort on the one hand and the work of the Iranians on the other,” she said. “I would have to say, however, to the degree that the Iranian efforts are helping to degrade or destroy ISIL in some way, that can’t help but be helpful to the overall effort.”

James, 56, a former House staffer and executive in the national security industry, was direct and blunt-spoken Tuesday in USA TODAY’s weekly video newsmaker series. The hallway outside her office is lined with portraits of her 22 predecessors, all but one of them male.

She apparently is the first secretary of a branch of the armed forces to support the idea of ending the ban on transgender troops, though House Democratic leader Nancy Pelosi of California and some other members of Congress have urged the Pentagon to lift it.

The Williams Institute, a think tank based at UCLA, has estimated that about 15,500 transgender people are now serving in the U.S. military. Supporters of the prohibition say allowing transgender troops would create complications on issues from housing to health care.

Groups that have urged the ban be lifted applauded James’ remarks. Aaron Belkin, director of the Palm Center, which has published research on sexual orientation issues in the military, called her statements “a positive step” but added, “President Obama is the commander in chief and is ultimately responsible for setting policy, and it is imperative for him to clarify his position as well.”

Her comments “provide further proof that it is only a question of when, not if, the outdated, discriminatory ban on transgender troops will be lifted,” Ian Thompson of the ACLU said.

The Air Force has been leading the battle against the Islamic State, a military campaign that wasn’t on the horizon when James was sworn in almost exactly a year ago.

“The very fact that we have this campaign at this moment is a surprise, I think most Americans would agree,” she said. “We did believe that we would have a bit of a strategic pause in the Middle East as we wound down the combat operation in Afghanistan.”

Still, “very solid progress” is being made, she said. 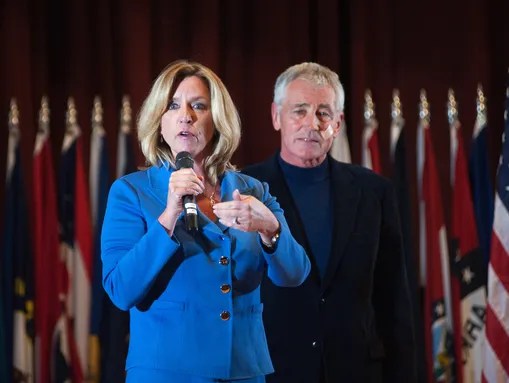 “On the ground, of course ISIS isn’t waving that flag around quite so openly anymore, so our efforts have succeeded in getting them to change their tactics, their techniques. They’re going much more underground,” she said. But she cautioned, “We need to have strategic patience because this will be a long ball. This will be a fight which will likely take years.”

James worked for a decade for House Armed Services Chairman Les Aspin, a Wisconsin Democrat who became a secretary of Defense in the Clinton administration.

Washington worked differently then, she said, even with a Democratic-controlled House dealing with Republican presidents Ronald Reagan and George H.W. Bush.

“Back in the 1980s, when I started on the House Armed Services Committee, there was a lot of compromise,” she said. “Members seemed to know one another quite well, not only professionally but also personally, and therefore they could talk more together about any number of issues. And there seemed to be more civility perhaps in those days, that you could disagree but not walk away necessarily mad and refusing to discuss various items.

“So today it just strikes me that we somehow have become much more divisive, and that there’s less compromise that people are willing to engage in ….

“It complicates the job,” she said.